A polymath is a person who has excelled in many diverse pursuits. They are not dilettantes because they achieve fluency and proficiency across multiple arts, disciplines, or fields of study. While many of them receive acknowledgement for their accomplishments (like Leonardo da Vinci) either academically, professionally, or both, many don't (like me!) The most important characteristic that sets them apart from merely ambitious individuals, according to researchers, is a drive and willingness to learn new things. I would add two more primary qualities: creative intuition or intuitive creativity, and a natural predisposition for the language of imagery and symbolism. Deep pattern recognition often reveals a heightened ability to see connections between things, people, and events not ordinarily discerned. This, in turn, enhances their ability to cross-over, gather, use, and share helpful information from many different fields of study.Watch the following short videos for a better understanding of the true nature of polymaths. Then the World's Greatest Polymath will be revealed!

All Power to the Polymath

Ella Saltmarche is a screenwriter, journalist, strategist, campaigner and entrepreneur. She is one of the founding directors of The Point People, a company that harnesses the power of those who work across disciplines and The Comms Lab, a platform for the communications industry to amplify its social impact.

Ben Vandgrift struggles daily with a compulsion to solve problems. His decades-old journey has most recently led him to Clojur, allowing him to solve many software problems elegantly and efficiently. He works as a software engineer when he's not being mauled by his rescue panther. 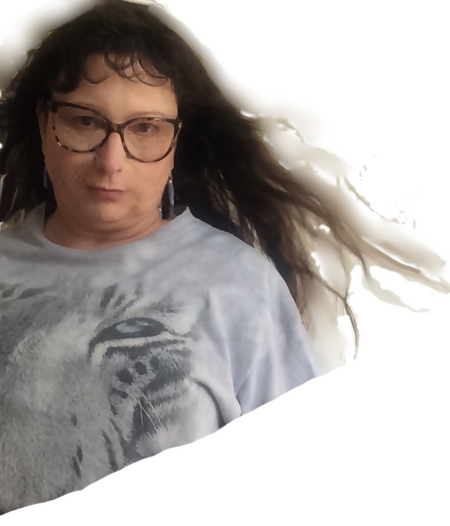 In so far as I can tell, there really is no “WORLD’S GREATEST POLYMATH.” But that didn’t stop me from trying to claim that title from THE GUINNESS BOOK OF WORLD RECORDS for reasons soon revealed. But first, WELCOME!
I'm Judy Kennedy aka waywardmuse - mystic polymath, wild and free. My application to Guinness was born of an almost harebrained idea and last ditch effort to preserve a legacy and to make a point. Guinness has a thick rule book regarding definition and specific protocol, so I had to research the feasibility of this idea very thoroughly. Here's a copy of the actual application:

CLAIM TO THE TITLE

Guinness initially requires that the application process be entirely online. Therefore, space limitations prevented me from presenting my case to the fullest extent possible. (Enlargement of document in pdf form accessible via linktr.ee/waywardmuse) 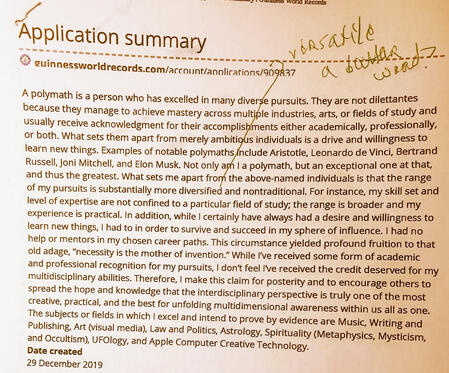 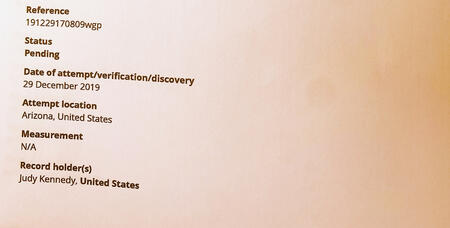 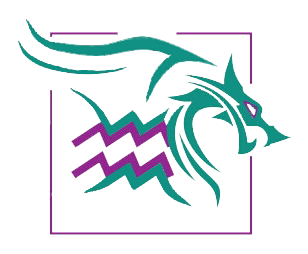 SO how did Guinness respond to my application to be crowned with the title, “The World’s Greatest Polymath”? They rejected it on the basis that this was not a title that could be subjected to metrics. I disagreed and asked them to reconsider. The conversation follows. (Again, enlargement of this document in pdf form accessible on my linktree page - see button at the end of this page.) 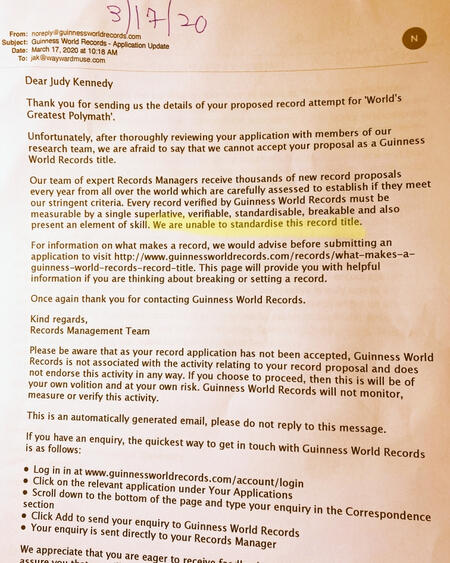 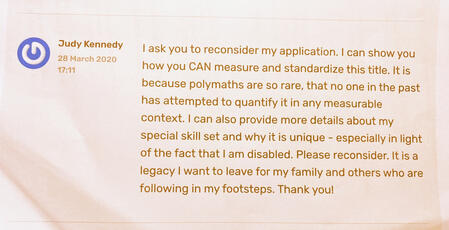 I asked to be given a chance to show them how they could measure and standardize this title, as that was their main objection, given their probable lack of familiarity with it.
I also volunteered to submit my evidence and documentation - much of it already online.

Guinness indicated that they still felt they would we unable to standardize the record on a global scale and continue to monitor it. I wanted to rebut again on the basis that there is a first time for everything, but knew they were done with this issue. That's all right. I'd made my point and was on record as the first person to try!MOVING ONWhy did I do this? I really didn’t care about claiming that title because I knew it wasn’t true. Furthermore, I knew about the less reputable background, behavior and motives of the Guinness organization. It’s not one I’d want to be associated with in the long term. I did this only as a MEANS TO AN END. The whole idea and aim in applying for this title was to PRESERVE A LEGACY. I know I’m probably not the world’s greatest polymath. I just didn’t know any other way I could be recognized for all my talents and contributions to the world. With my death would be lost so much - no one would have ever really known me - not even my family! No one would have been able to find what I’ve done in order to receive the benefits. I've dedicated the merits of my work to the entire planet for the well-being of one and all. I could care less about titles. Otherwise I would have continued along the academic path and become a “Dr.” I have no human children. My creative works (and domestic animals) are my children, and I just want them to bring hope, inspiration, and joy to the world in a way that I couldn’t. It’s my bodhisattva vow - my commitment to the Great Work that I made when I was just 16 years old. That vow is to serve - and I serve best through being true to myself - my polymathy. I can serve even better by bringing it to the attention of the world and especially others like me who have suffered under the oppression of a society that does not yet recognize our value.I wanted to bring notice to me and to the value of polymathy.When I realized that my special superpower was really being a polymath, it opened my eyes up to a world of possibilities - not just for me, but for everyone, as Ella Saltmarche and Ben Vandgrift emphasize in their videos. This is a power in each of every one of us. Some of us are blessed to be born with the stalk showing “above ground.” With some of us, it’s still a seed. But it’s there. Don’t you ever doubt it. All it needs is a little care and coaxing. 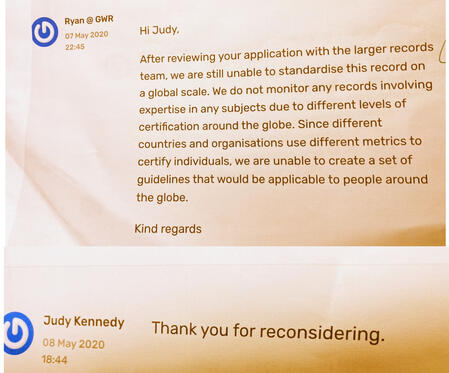 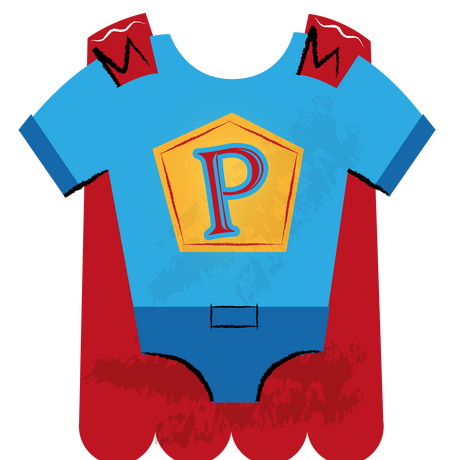 This site is temporary. The original one that will be permanent and ongoing is still under construction. Until then, please feel free to peruse the links to my social media, custom websites, and various niche stores on my Linktree page. Thanks again for visiting and many blessings to you! 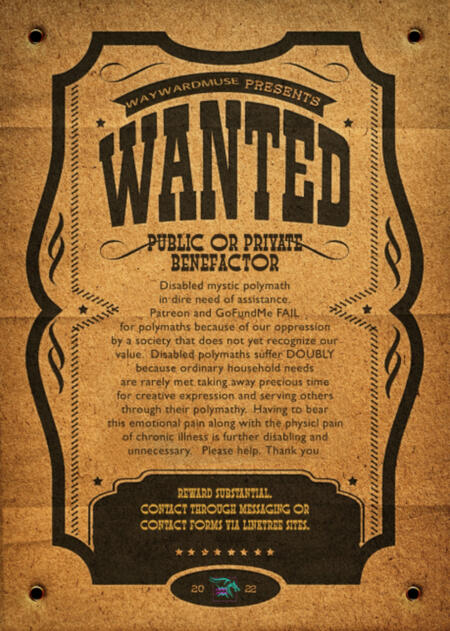 see enlarged copy of wanted poster on my Linktree page!